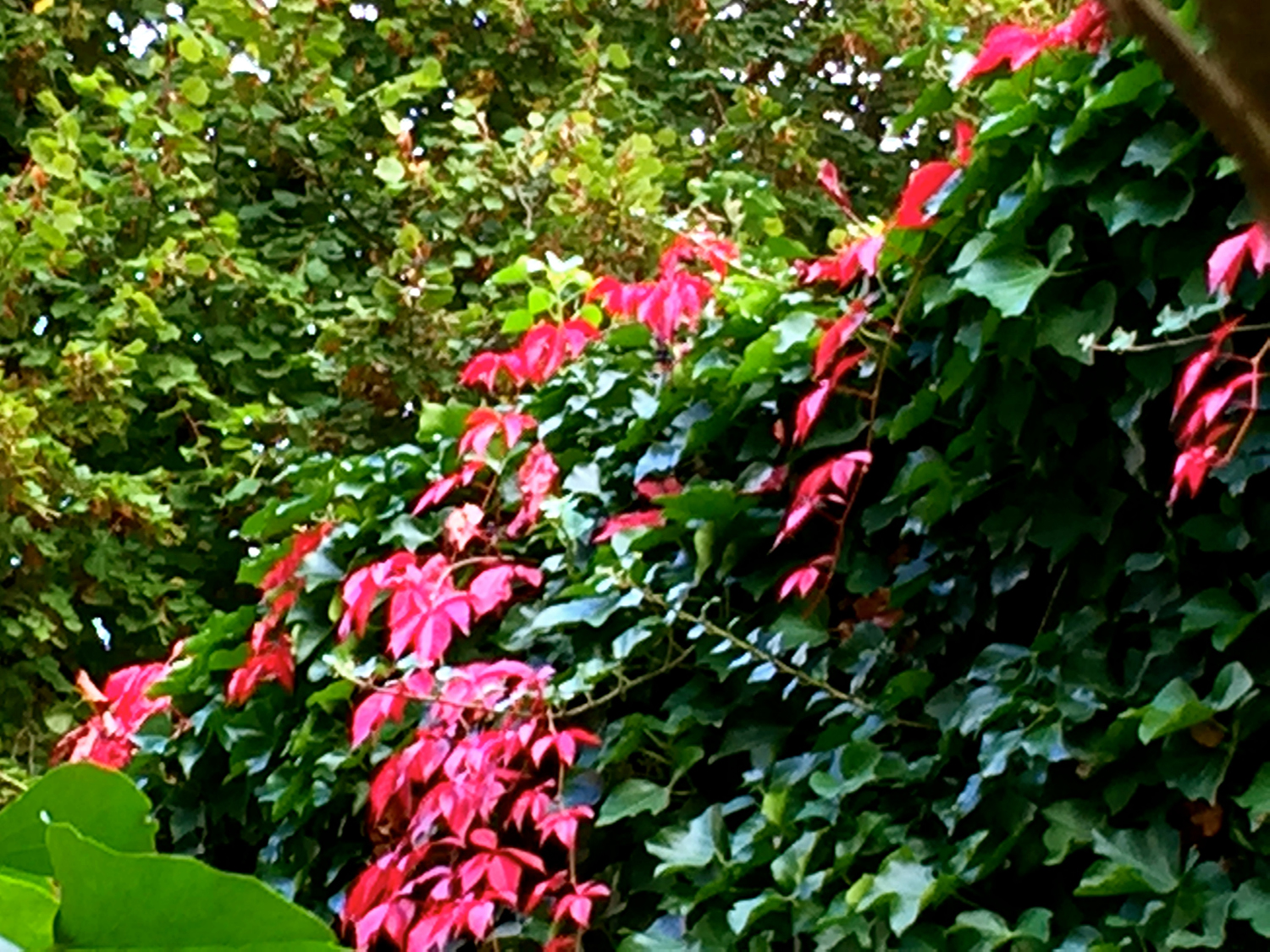 Strawberries, cherries and an angel’s kissing spring.
My Summer wine is really made from all these things…
I walked in town on silver spurs that jingle too,
a song that I had only singed to just a few.
She saw my silver spurs and said ‘let’s pass some time
and I will give to you
summer wine
Oh!, summer wine (Summer Wine, Nancy Sinatra)

Well no, my summer wine is not made of strawberries, … but it is made of Rowan Cotton Glacé.

This is my last summer knit for this year. It is called Estefan a design by Brandon Mably and it is published in Rowan Knitting & Crocheting Magazine 55.

In this year we have had summer in Aril and autumn in August here in Germany with a lot of cloudy skies and rain. Therefore I have to wait to take the pictures for this garment even though it was finished in August.

As some of you already know I was for a visit at Rowan Yarns in Holmfirth, UK in June. But some of you might not know that “The Last of Summer wine” (the longest-running comedy programme in Britain and the longest-running sitcom in the world) was set and filmed in and around Holmfirth, West Yorkshire. My friend Cindi has written some great blog posts about this journey to Rowan.

Back to the design.

Estefan, a men’s tank is knitted in intarsia technique throughout, showing a diamond shaped pattern on both back and front. It is knitted using four shades of Rowan Cotton Glacé (Dijon 739, Twilight 829, Garnet 841 and Blackcurrant 862).

I have already talked about the “horror” of weaving in ends in a previous post. But I’m really happy with the result.

Although I do not like taking pictures this “photo session” has been fun and so I will also put in some “outtakes”!

Here’s to us one more toast and then we’ll pay the bill
Deep inside both of us can feel the autumn chill
Birds of passage, you and me
We fly instinctively
When the summer’s over and the dark clouds hide the sun
Neither you nor I’m to blame When All Is Said And Done (When all is said and done, Abba) 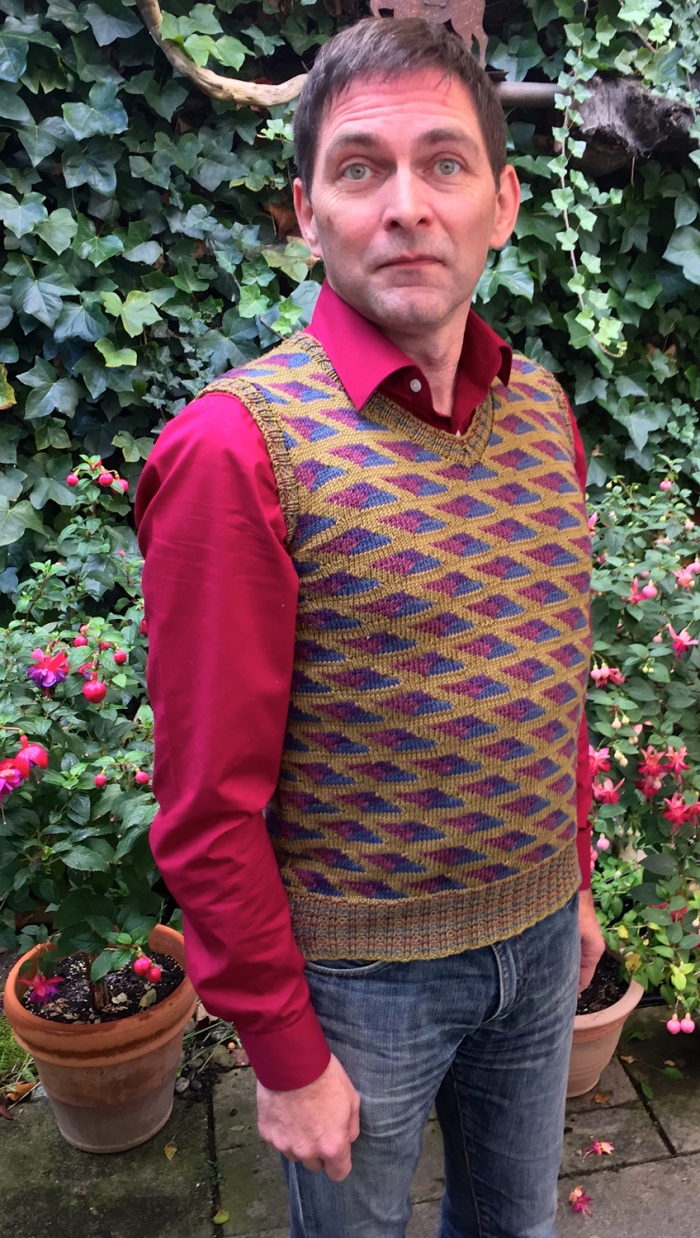 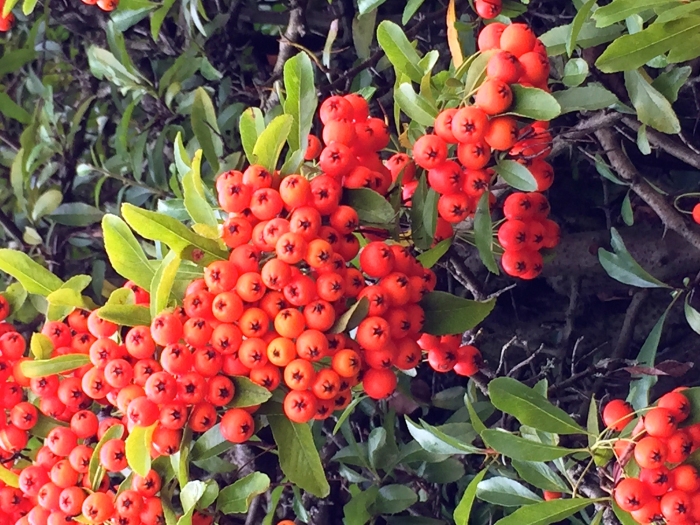 Summer afternoon—summer afternoon; to me those have always been the two most beautiful words in the English language. (Henry James)

I almost wish we were butterflies and liv’d but three summer days – three such days with you I could fill with more delight than fifty common years could ever contain. (John Keats, Bright Star: Love Letters and Poems of John Keats to Fanny Brawne)

[T]hat old September feeling, left over from school days, of summer passing, vacation nearly done, obligations gathering, books and football in the air … Another fall, another turned page: there was something of jubilee in that annual autumnal beginning, as if last year’s mistakes had been wiped clean by summer. (Wallace Stegner, Angle of Repose)

This was my last summer knit for this year. Going on with autumn and winter.

These are the forgeries of jealousy:
And never, since the middle summer’s spring,
Met we on hill, in dale, forest or mead,
By paved fountain or by rushy brook,
Or in the beached margent of the sea,
To dance our ringlets to the whistling wind,
But with thy brawls thou hast disturb’d our sport.
Therefore the winds, piping to us in vain,
As in revenge, have suck’d up from the sea
Contagious fogs; which falling in the land
Have every pelting river made so proud
That they have overborne their continents:
The ox hath therefore stretch’d his yoke in vain,
The ploughman lost his sweat, and the green corn
Hath rotted ere his youth attain’d a beard;
The fold stands empty in the drowned field,
And crows are fatted with the murrion flock;
The nine men’s morris is fill’d up with mud,
And the quaint mazes in the wanton green
For lack of tread are undistinguishable:
The human mortals want their winter here;
No night is now with hymn or carol blest:
Therefore the moon, the governess of floods,
Pale in her anger, washes all the air,
That rheumatic diseases do abound:
And thorough this distemperature we see
The seasons alter: hoary-headed frosts
Far in the fresh lap of the crimson rose,
And on old Hiems’ thin and icy crown
An odorous chaplet of sweet summer buds
Is, as in mockery, set: the spring, the summer,
The childing autumn, angry winter, change
Their wonted liveries, and the mazed world,
By their increase, now knows not which is which:
And this same progeny of evils comes
From our debate, from our dissension;
We are their parents and original. (Titania: A Midsummer Night’s Dream, Act II, William Shakespeare)

Posted on October 2, 2014 by knittingkonrad in Cotton Glacé, Rowan

14 thoughts on “Last of the Summer (Wine) Knits”

2019 is slowly coming to its end here in Germany. Some of you have already entered the New Year 2020, others are expecting it soon. Wishing everyone of you a Happy New Year. With a lot of Joy, Health, Success and Creativity. 🕊 💜 💫 #newyear #newyearseve #happynewyear #happynewyear2020 #2020 #neuesjahr #silvester #gutesneuesjahr #gutesneuesjahr2020
#fairislefriday Petrie by Susan Crawford #susancrawford #vintageshetlandproject #excelana #knittersofinstagram #menwhoknit #fairisle #fairisleknitting